Two of my plays, Persephone  and Bombs and Blackberries  include songs. These are both suitable for a whole top junior class to act.

I have also written two musicals for adults to perform to children, the scripts of which can be supplied by my agent Caroline Sheldon.

I wrote the first one, King Grunt’s Cake, when I was in my twenties and living in Brighton. I got together a group of actors and we performed the musical in the Round House Downstairs in London and at the Gardner Centre in Brighton. Malcolm had two roles – King Grunt and a morris-dancing farmer, and I was Lola the kitchen cat. My sister Mary had a cameo role as a cockerel called Clarence.

A few years later I followed this up with another musical called Pirate on the Pier, which again we performed in Brighton and London.

Malcolm was Polperro the pirate and I was a crooked fortune-teller called Gypsy Nose. 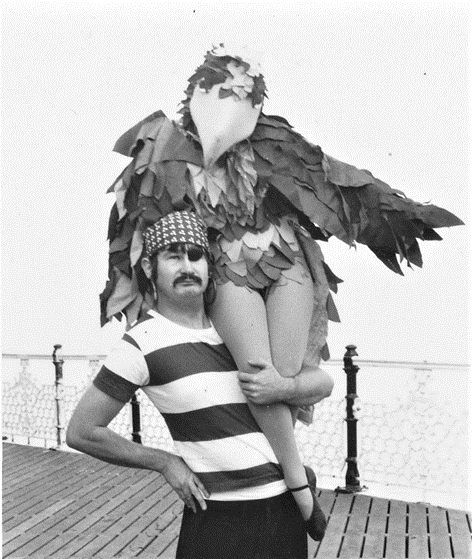 Malcolm as the pirate, with the parrot (played by Heather Allen) perched on his shoulder.

You can find out more about the musicals by clicking on the posters below.

Would you like to find out about the plays I’ve written for a class of schoolchildren to act?”